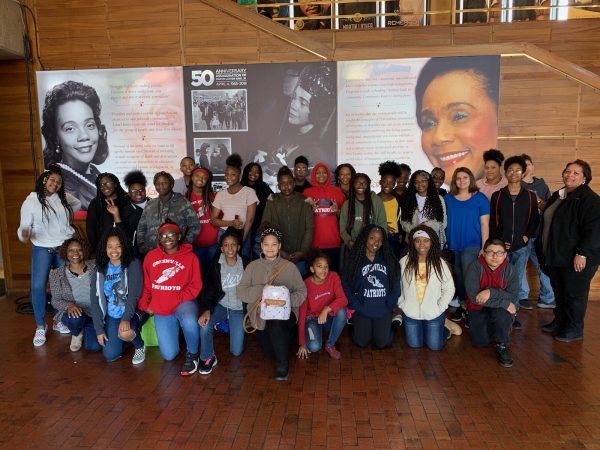 Students from the Morehouse Educational Talent Search After-school Program at Greenville Middle School had an opportunity to participate with Students with King Youth Initiative at the King Center in Atlanta, Georgia on March 21, 2019.  Prior to the trip, the students read, researched, and learned historical facts about Dr. Martin Luther King and his family.  The students were able to tour the King’s family home and Ebenezer Baptist Church where Martin Luther King’s father and grandfather preached in for years.  The students also got a chance to participate with other schools in the Think Pair Share Show.  Brianna Rosser and Shania Mister served as the leaders for Greenville Middle School, and both did an exceptional job as they ask the panelist questions about the King Family.  The panel members were Dedra Dukes, Anchor from Fox 5 News and Ms. Davenport, SCLC representative.  The students learned that the Southern Christian Leadership Conference (SCLC) is an African-American civil rights organization. SCLC, which is closely associated with its first president, Martin Luther King Jr., had a large role in the American civil rights movement.  After the King Youth Initiative event, the students went to tour Morehouse College and eat lunch with the Morehouse College students on the campus.